In this section, we will go over the basics of SVG Paths and how to create them using D3.js.


The Shape to Make All Shapes

SVG Paths represent the outline of a shape that can be stroked, filled, used as a clipping path, or any combination of all three.

W3 then provides an analogy relating pen and paper roughly as follows:

Which means that you can use an SVG Path to make any type of SVG shape.

The shape of an SVG Path element is defined by one attribute: d.

This attribute, d, contains a series of commands and parameters in the SVG Path Mini-Language.

These commands and parameters are a sequential set of instructions for how to "move the pen over the paper".

The instructions are defined in case-senstive terms of moveto (set a new current point), lineto (draw a straight line), curveto (draw a curve using a cubic Bézier), arc (elliptical or circular arc) and closepath (close the current shape by drawing a line to the last moveto).

For example, we could draw a triangle as follows:

In this case (all in the SVG Coordinate System - X coordinate first, then Y coordinate):

The rest of the commands (stroke, stroke-width, fill) dictate what the line looks like and what if anything is the color that is filled in.

Note - our letters (M, L) are capitalized which means that we were using absolute positioning within our SVG Viewing window. If we use lower case commands, then we will be using relative positioning.

As we saw in our example, there is an SVG Path Mini-Language comprised of lower and upper case letters.

This Mini-Language is defined as follows:

As you can gather from our simple example above and the Mini-Language described above, it's a bit difficult to create SVG Paths for anything more complicated than a single line.

Which is where D3.js comes to the rescue with Path Data Generators!

Before we go into all of the D3.js Path Data Generators, let us look at a specific example for the line path data generator.

For a line graph, we have a sequence of x,y coordinates.

The sequence of x,y coordinates represents one line.

We need a function that will take our data and convert it into the SVG Path Mini-Language.

D3.js provides us with a Path Data Generator Function for lines:

This Path Data Generator Function will take our data and generate the necessary SVG Path commands.

In order to convert our data to the SVG Path Commands, we need to tell the line Path Data Generator how to access the x and y coordinates from our data.

We do this by providing an accessor function to return the x,y coordinates from our data.

For each x and y combination, we need to provide an accessor function to return the x,y coordinates from our data.

We define the accessor functions which the path generator uses to produce path data:

This accessor function will take in the data array that is passed to D3.js and extract the the set x,y coordinates.

It will then do a linear interpolation between each point.

The result is then passed back to the SVG Path as the d attribute.

Let us look at an example: 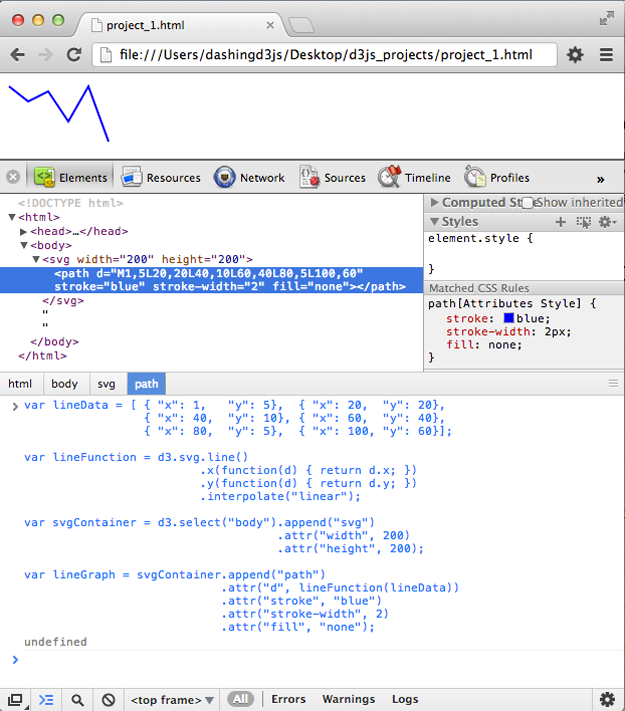 A couple of things to note:

As you can see from the picture and results above, D3.js took the following data set:

Ran it through the d3.svg.line() function with the accessor functions attached:

To Generate the following SVG Path (as seen in the picture in the HTML bit):

Which is brilliant! If you look at the <path ......></path> code, you can see the Path Generator commands!

Which is fantastic, because we can feed in as many points in the data set, and D3.js will generate the SVG Path for us that is linearly connected.

The example above showed the line Path Data Generator:

The path generator is both an object and a function.

Which means you can call the generator like any function and the generators will have additional methods to change its behavior.

Like other classes in D3, path generators follow the method chaining pattern where setter methods return the generator itself.

This allows for multiple setters to be invoked in a concise statement.

Each of the generators above has specific setter and accessor functions provided by D3.js to make creating awesome paths easier.

For each of the specific SVG Path and Area Generators, there is much ground to cover before we can delve deeply into how each one works, what to take note of, and how to make it work for you.

For now, know that they exist to make your life easier and that we'll come back to them soon enough.

If you found this D3 Tutorial helpful, you'll enjoy these FREE videos: